Don't judge a book by it's cover

We've all heard the old saying, “Don't judge a book by its cover.” Yet, society tends to disregard this excellent advice when it comes to drawing conclusions about dogs based on nothing more than their breed or breed mix. It's true that dog breeds were developed by humans with specific characteristics in mind to make them better suited to certain jobs, like herding sheep or tracking game. However, all dogs of any breed are still individuals. They can and do have different characteristics from other dogs of the same breed or even from their littermates, just like the same human parents can have one child who prefers to play sports all day and another who just wants to curl up with a book. The influence of the humans around a dog as it grows can have a huge impact on its behavior as well. 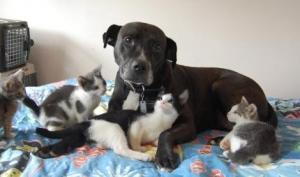 Often, humans look to a dog's breed for easy answers about whether or not it will be a good family pet. In recent years, breeds such as the German Shepherd, Rottweiler, Doberman Pinscher, and most recently, the “pit bull” - a category that can include the American Staffordshire Terrier, American Pit Bull Terrier, American Bulldog, and others – have been maligned as “dangerous” or “aggressive” by nature, while others such as the Golden Retriever and the Labrador Retriever have cultivated a reputation as the quintessential family pet. However, several decades ago, the picture was quite different! In the 1930s, the popular film series “Our Gang” (later known as “The Little Rascals”) featured a pit bull terrier as the children's beloved companion Petey.

One not-for-profit group, the American Temperament Test Society, has undertaken to study dog psychology by administering standardized temperament tests all over the United States since 1977. The results shed some interesting light on the often oversimplified relationship between breed and temperament. The average pass rate for all breeds of dog, including mixed breeds, is 83%. The family favorite Golden Retriever has a pass rate of 85.2% for 785 dogs tested. The much-maligned breeds of German Shepherd Dog, Rottweiler, and American Pit Bull Terrier, however, show comparable passing rates of 84.8%, 84.1%, and 86.8% respectively!

Determination of a dog's temperament is much, much more complex than breed alone. Unfortunately, based on the misguided idea of breed-based danger or aggression, some areas still pass laws known as breed specific legislation (BSL) that ban certain breeds of dog without any regard for individual behavior. However, groups such as the ASPCA and the American Veterinary Medical Association, which are devoted to dogs and the humans that love them, take a strong stance against BSL and similar policies. By focusing on breed alone, dogs who have never shown the slightest aggression can lose their homes and families, and local governments waste money and time on responsible owners and non-aggressive dogs. Visual identification of dog breeds outside of books and show rings is also unreliable, especially for mixed-breed dogs. The ASPCA states that they have found no credible data supporting the idea that BSL makes communities any safer. You can read more about the ASPCA and AVMA evaluations of breed-specific measures by following the links at the end of this article. 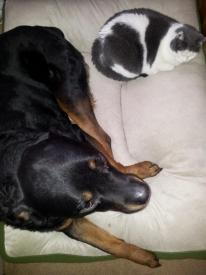 Even if your community doesn't have any breed-specific legislation, breed stereotypes can still affect you. If you own a home with a mortgage, you are likely required by your lender to carry homeowner's insurance. This insurance generally includes damage done by your pet to other people or their property. However, some insurance companies will exclude your dog from your coverage if it even appears to be of a certain breed or breed mix. Others will cover your dog, but at a much higher premium, and still others may refuse to sell you coverage altogether! Be sure to ask your insurance provider about your canine pal's coverage, and consider companies that don't penalize friendly dogs based on appearance alone. Many breed advocacy groups keep lists of dog-friendly insurance, such as Animal Farm Foundation, a group that works toward individual evaluations for dogs of all breeds. You can find their page about housing and insurance resources in the links list below.