As a veterinarian, and a human, I have always been fascinated by the amazingly different animals around the world. The behaviors, evolutionary traits, eating habits, breeding habits, and just plain crazy facts never cease to astound me.

Did you know that:

The earliest European images of dogs are found on cave paintings dating back 12,000 years. Cats have lived with humans for over 7,000 years.

A group of cats is called a Clowder. A group of owls is a 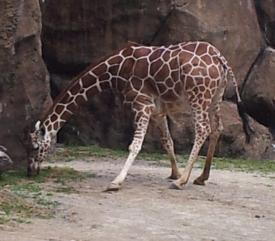 Parliament. A Murder of crows. A Prickel of porcupines. A Smack of jelly fish! A Staff of Eagle Animal Hospital employees.

A BLIND chameleon will still change color to match its environment!

A flamingo can only eat when its head is upside down. They are pink because they eat mainly shrimp.

Giraffes have no vocal cords. They have only seven vertebrae in their necks - Just like us!

The tongue of a blue whale weighs more than most elephants. I would not want to be the Veterinary Dentist for a whale.

Apes can go bald. And, look handsome and distinguished like Dr. Matunis!

All polar bears are left handed. This makes it difficult to use scissors and write on chalk boards. I can sympathize with that.

All bats turn left when leaving a cave. They can eat up to 1000 insects per hour. So, to avoid being bitten by bugs, hang out on the left side of caves. 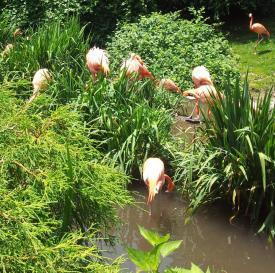 Sloths give birth upside down.... SLOWLY!

All frogs are poisonous. This helps protect their constantly wet skin against bacteria and fungus. As well as any princesses.

House flies hum in the Key of F. HMMMMMMMMMMM.

There are an average of 50,000 spiders per square acre of green areas. Yikes! That's a lot of spiders. An average person will swallow 8 spiders in their sleep over a lifetime. Luckily you are more likely to be killed by a champagne cork than a venomous spider.

A hibernating bear can go as long as 6 months without a bathroom break.

Oysters can change from one gender to the other and back again depending on which is best for mating.

Sharks are immune to cancer. Unfortunately they are not immune to fisherman and people's desire for shark fin soup!

Menopause is limited to female elephants, humpback whales, and humans. Hot flashes for all.

These are just a few of the crazy fun facts about animals that show what a mixed up, diversified, world we live in. So, the next time someone thinks you are strange, or different, just do what a crocodile wishes they could... stick your tongue out at them.