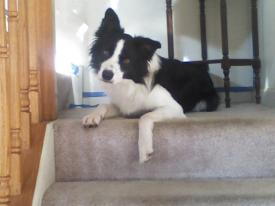 "Mange" is the general term for a group of skin infections caused by different types of microscopic mites. These mites are parasites that live on the skin of animals such as dogs, cats, wild mammals such as foxes, and in some cases, even humans. Two of the most common types of mange in dogs are sarcoptic mange and demodectic mange, commonly called scabies and demodex. Today we will discuss sarcoptic mange, and next week our blog will feature more information about the demodectic type.

Sarcoptic mange is caused by a species of mite called Sarcoptes scabiei. When these mites come into contact with a dog's skin, the female mite will actually burrow just under the skin's surface, leaving several eggs behind her. When the eggs hatch about 3-10 days later, the young mites go through a larval and nymph stage before maturing into adults, at which point they will mate and the cycle will repeat.

Unlike fleas, scabies mites are too small to see with the naked eye. The first signs of an infection will be severe itching, along with hair loss and redness or irritation of the skin. Usually the ear flaps, hocks, elbows, underarms, and belly are most affected, since the mites prefer areas where there are fewer hair follicles. The skin will often take on a scaly or crusty appearance, especially in these areas. Itching occurs for two reasons in scabies. The movement of the mites and larvae can be irritating in itself, but also, the burrowed mites can cause an immune response similar to an allergy, which means that itching can persist after the mites are killed.

If your dog is showing signs similar to sarcoptic mange, our veterinarians will often try to confirm that the mites are present with a test called a skin scraping. In this test, a sample of cells from the surface of the skin is placed on a slide, allowing the doctor to look for the mites with the aid of a microscope. If mites are seen, then we know we have the correct diagnosis. However, because it may only take a few mites to cause the symptoms, sometimes there are no mites in the sample even when the problem is indeed sarcoptic mange. Because of this, and because the treatment for scabies is very safe and easy, the doctor will often recommend treatment even if no mites are seen. If the dog shows improvement with treatment, then we know that there were mites present even though they were not detected with testing.

There are several options for treating sarcoptic mange in dogs. One of the simplest is to use the product Revolution®, which contains an ingredient called selamectin. Revolution® is a common topical preventative for fleas, ticks, and heartworms, and can be used to prevent or treat sarcoptic mange. As a preventative, it is applied once a month, but when trying to eliminate an existing scabies infection, it is applied every 2 weeks for 3 treatments. It is applied between the shoulder blades just like many other flea and tick preventatives. Do not apply Revolution® more than once a month unless advised by your veterinarian. Sarcoptic mange can also be treated with Ivermectin and other similar medications. Because the mites can spread to other dogs, it is important to treat all dogs in the household, even if they are not all showing symptoms yet.

Scabies mites can cause symptoms in humans, although they do not reproduce and complete their life cycle without a canine host. Similarly, cats are a poor host, although they may also be affected. Cats are more severely affected by a different mite called Notoedres cati, which causes notoedric mange. This typically produces facial itching and scabbing, that will then spread to other areas of the body if not treated. However, this infection is much more uncommon than sarcoptic mange in dogs, and is considered rare outside of certain geographic regions such as southern California.

If your dog shows signs of severe itching, scabby or scaly skin, or hair loss, call our office for an appointment to assess the symptoms. Don't forget to check our blog in the coming week for more information about another type of mange!

If you have any questions regarding sarcoptic mange, please contact us Eagle Animal Hospital 610-458-8789. We serve Chester Springs, Downingtown, Exton, Glenmoore and the surrounding area.