If you have a dog in your family, chances are you have witnessed a reverse sneeze. If you don't know what is happening, watching the episode can be a worrisome experience. I remember the first time I saw my dog reverse sneeze. It only lasted a couple seconds. I was scared, not knowing what was wrong with him and was at a loss of how to help. After those few seconds he was completely fine and back to his normal, happy self. Even though nothing seemed 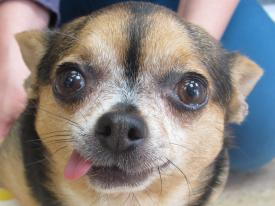 to be wrong with my pup, I was still worried and confused about what had happened to him. I did some research and found that what I had seen was a reverse sneezing episode.

A reverse sneeze is pretty much exactly what the name says. The animal has burst of quickly sucking air into the nose instead of a spasm of where air is rapidly pushed out of the nose (a regular sneeze). The sound produced is best described as a gasping/ honking snort. Many times the animal will have their neck outstreched and be standing still. In the veterinary field we have owners calling or coming in thinking their pet is choking on something when they have been reverse sneezing.

If your pet is having an episode there is something you can do that may help. Point their head skyward and rub the throat gently in a downward motion to promote swallowing. Putting a very small amount of warm water in their mouth while doing this may also help.

Some dog breeds are more prone to reverse sneezing. These include small breeds and Brachycepalic (smushed/ flat faced) dogs like Bulldogs and Boston Terriers. It is also seen much more frequently in dogs than cats.

There is no definitive known cause of reverse sneezing, but it can occur from throat and soft palate irritation. This irritation can come from a variety of things such as smoke and dust, eating and drinking, excitement, perfumes and colognes.

Reverse sneezing is usually common and normal, especially with dogs. An episode should last a short amount of time. It is not dangerous to your pet and will not require any treatment at all. If your pet is reverse sneezing often or chronically contact us at Eagle Animal Hospital to have them examined by our veterinarians so we can rule out more serious issues such as allergies, foreign body, upper respiratory infection, etc.