Giardiasis or Giardia is a disease we see often in the veterinary field. It infects dogs more often than cats, and puppies, kittens and older pets more often than healthy adults. It is a zoonotic disease, so people are susceptible as well. Your pet can become infected through their natural environment, most commonly by drinking contaminated water such as a dirty puddle at a neighborhood park. 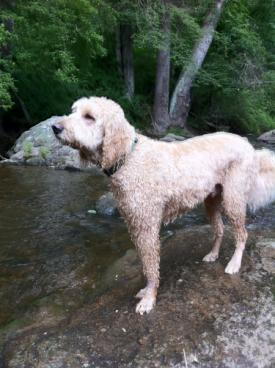 Giardiasis is caused by the protozoal parasite, Giardia canis. The cystic stage of Giardia is swallowed by a pet and ingested which releases trophozoites. These trophozoites make their way to the small intestine and attach themselves to the intestinal wall. Here they feed and mature back into cysts. The cysts (which protect the trophozoites outside of a host) then get passed in your pets feces and re-infect the environment.

Many pets that are infected with Giardia are asymptomatic. They do not show any signs and appear completely normal. This is one of many reasons to have fecal samples tested annually. When pets do have symptoms the most common is diarrhea. The diarrhea may look watery or mucous-like, pale in color and foul smelling. In severe cases, with persistent diarrhea, your pet may become dehydrated, lethargic and anorexic. Rarely vomiting can occur, as well.

To diagnose Giardia a fecal sample is examined for the presence of cysts and trophozoites. Sometimes multiple tests are necessary. Treatment depends on the severity of the infection, most of the time a course of antiparasitics will be sufficient.

If you're worried that your pet has Giardia or to learn more about it contact us at Eagle Animal Hospital (610)458-8789 or Eagleanimalvet.com. We serve Chester Springs, Exton, Glenmoore, Downingtown and the surrounding areas.