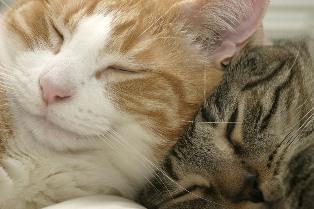 Its hard to imagine that our feline friends are designed to be so FIERCE. But, even the most loving, quiet cats have all the tools of a natural born hunter.

: Cats primarily use their eyesight to track their prey

*Cats have larger pupils compared to other animals, aiding in the ability to see in darkness.

*Their eyeballs are rounder and shorter then humans giving them a wide angle view.

*Cats have special light reflecting membranes built into their eyes which acts like a mirror.

Cats have absorptive tissue in their noses helping them to pick up scents and smells 5 to 10 times more accurate then humans.

*Cats have close to 200 million olfactory receptor cells in their noses, humans only have 5 million.

*Cats use their noses to detect scents that is not his/hers in their territory.

*Cats use their sense of smell differently than that of our canine friends.

Are another way a cat tracks its prey.

*Cats hearing is very sensitive and can pick up on high pitched frequencies well beyond what dogs can hear, and three times the range of what people can hear.

*Their teeth are designed for tearing rather then grinding their food.

*The canine teeth or "fangs" are made for holding their food/prey.

*Their tongues are a sandpaper like texture, and have tiny barbs on the surface called "papillae" which also aids in holding their prey.

They play a very important roll in a cats everyday life

*cats have 8-12 long whiskers on each side of their upper lips, and some shorter tufts on their upper eyelids and chin

*Their whiskers act as sensors which detect and perceive the presence of near by objects and very fine movements. They also aid them in the darkness.

*Whiskers are also found on the back of their forelegs. These collect information on their captured prey. 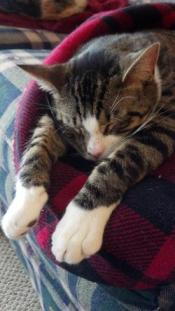 Allows them to be very agile

*Their vertebrae are connected by muscle instead of ligaments.

*These powerful muscles allow the cats spine to flex, extend and even twist.

*Allows then to jump and climb with ease.

*Their back legs are very strong and can deliver a powerful blow to their prey.

*Cats have large, soft pads on all 4 feet which cushions each step making their movement quieter and allowing them to sneak around without being heard.

*Cats claws/nails are retractable, so there will be no clicking sound when they walk

*When needed, a cat can extend his/her claws/nails in a second.

Every part of the cat's anatomy is remarkable, especially how well it all works together. So the next time you are watching your cat play, stalk, or hunt you will now understand how it all works. ENJOY!