I am a beautiful 2 year old Dachshund with long red hair and my owner is a professional breeder. Earlier this year, she decided it was time for my first breeding experience and this is my story.

I became pregnant late in the spring of 2011 and felt pretty good throughout most of my pregnancy. In July, I went to see my doctor, Dr. Matunis at Eagle Animal Hospital. My owner was curious to see how many little ones I was carrying. X-rays revealed a modest number: two babies, positioned side by side and developing normally. The staff was excited about my little miracles. I was just glad it was only two. 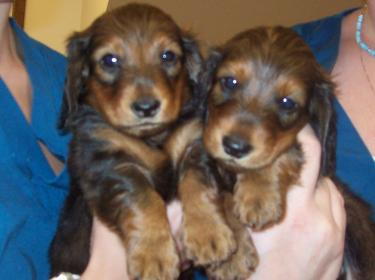 I had been having cravings on and off so I had been snacking on various items to satisfy those urges. After a while, I think I overindulged and started to feel sick toward the end of July. Still hungry, I ate my daily meals, but was having a hard time keeping much down. I was vomiting and became very lethargic. Were these babies ready to arrive? After all I was nearing my due date and as we all know, mom's to be can feel pretty nauseous just before delivery. Or was it something else?

So, I went back to see Dr Matunis at Eagle Animal Hospital. He gave me some medicine, repeated my x-rays, (which did not show anything alarming) and kept a close eye on me. But I was not feeling better. Concerned, he sent me to a specialist for an ultrasound of my abdomen which revealed two abnormalities.

One abnormality was an intussusception. A big scary word meaning a part of my bowel folded in upon itself. The second abnormality, a foreign object. Hmm..... No wonder I had been feeling so badly! I was not in labor after all. Worse, I needed emergency surgery. There was a bright side to this, the doctors had to perform a C-section while exploring my abdomen which meant no labor pain!

Lights out! When I woke up, I felt as though I had been run over by a pack of wild dogs. What did they find? First, my babies, a boy and a girl were both doing well. I was so proud. But, remember all that snacking? Well, I chewed on plastic, source unknown and I will not tell. Let them

The doctor's had gone into three different areas of my intestines to find and retrieve all the foreign material (all of it well hidden and barely visible even on ultrasound.) I was in critical condition, my blood pressure was low, I was weak, and anemic (I had to have a blood transfusion). They kept me in the ICU for a few days. My puppies needed me, I was determined to get better.

I attempted to nurse my pups, but my milk was not ample. I was in too much pain. The nurses were taking good care of them and my babies were thriving. I did end up with some post operative complications but I am fully recovered now.

It had been quite an ordeal. Hopefully, I learned my lesson about eating things I should not.

I am home now. Once my pups were a little stronger we went to see Dr. Granite for their first pediatric exams. As for the future, I hope my owner will let me raise them, but if not, I am sure she will find a great family who will adopt them. We will see.

With much love, Bella